Sports has many clichés, perhaps to save fans valuable time and bandwidth that they can reinvest by ignoring their families on Thanksgiving afternoon. I like that the dynasty format has its own lazy catch phrase – “there is no offseason” – for writers to abuse. Ordinarily I might feel guilty about leaning on this crutch in my own writing, but such is the life of the TDG contributor with a full time job, an infant, and a massive addiction to making dynasty trades.

Never have I better exemplified the aforementioned lack of offseason than this Tuesday evening through Wednesday evening from 6:09 PM ET on 1/3 until 7:34 PM ET on 1/4 in one of my favorite dynasty football leagues. (Okay, so it was closer to 25 hours, but that title didn’t read as well.) During that time I executed six different dynasty trades in one league. Normally, I would assume readers don’t really care about any leagues other than their own, but how can I pass up a chance to chronicle such an epic volume of transactions?

For context, this league (14 team, superflex, best ball, keep 28) just finished its first year. I always intentionally tank in year one of startups. Interestingly enough, in my experience most dynasty owners can’t delay gratification. So rather than compete against 13 other competent owners, I duck under the wave with the goal of re-emerging the next year with a young squad capable of sustaining a lengthy contention window. It’s a strategy I’ve employed many times and the fruits of my patience have been… fruitful.
Exhibit A, B, C and D: Case for Punting Year One of Startup 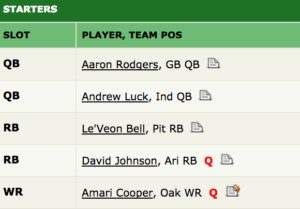 (If you thought that was an obnoxious display of my recent dynasty prowess, understand that I fully bought into Carson Wentz and drafted David Johnson… only to sell him for DeVante Parker. So I’m feeling very insecure right now.)

In this particular league my plan was to draft kids, bottom out, sell anyone I felt had more present value than future value, and be opportunistic (e.g. trading for injured Keenan Allen and Kevin White) while trading down in the startup draft to accumulate extra 2017 picks (I have 5 picks inside the top 15 in this year’s draft). And bottom out I did! I’ll be picking first overall.

With phase one complete (young core, lots of high value picks), it was time to go to work this offseason. I reached out to the owners I perceived to be interested in youth and picks (rebuilders, in other words) and within two days of the season ending I was exchanging names.

The format of the league is best ball and superflex. If you’re unfamiliar with best ball, it’s a league in which you don’t actually set a lineup, but rather your weekly starters are filled in automatically based on which players score the most at each applicable starting spot. As such, depth and volume of options are king, which is why I wanted no fewer than three quarterbacks on my team.

One of the lessons I learned from this past year’s quarterback class is that old reliables like Rivers are safer bets to give multiple years of production than the latest, greatest Goff du jour. The 2018 picks were my own, which may have made them look attractive given that I finished last, but I expect to win next year. So enjoy pick 1.14 in ’18, sucker! (Famous last words.)

The shiny “2nd round” status in front of these picks made them appealing trade chips when in fact the owners of each pick finished 1st and 2nd this year. Two late 20’s picks for another boring, reliable veteran? Yes, please. Don’t confuse mediocre with bad, folks. Eli’s years may be numbered, but he isn’t washed up just because he’s not that fringe Eli(te) quarterback anymore.

In a down year for #ZeroRB owners, Spencer Ware was a success story. Who knows how Charles’ knees will respond in 2017, but we do know Ware is a capable every down back with really good receiving chops. He earned the third highest receiving grade from Pro Football Focus among running backs behind David Johnson and Theo Riddick. As such, I’m confident I am getting an in-prime talent capable of fringe RB1 numbers in exchange for some question marks.

By Wednesday evening I had everyone’s attention. I had previously received some “I’m not ready to make moves yet” feedback, but after three “trade accepted” emails, I think even the cautious owners were starting to get trading FOMO. Most contenders had already dealt their draft picks to compete last year. I finally struck a deal with a second owner for Dez Bryant, who I view as a tier two dynasty asset. The (old) Dez owner announced the day prior that he may be looking to blow it up. I had more assets (picks and players) than I could keep and so I made my best volume offer. (Remember, this best ball league requires depth, so stars and scrubs will not work.)

My tight end depth chart was hurting after Hunter Henry, so I targeted two useful veteran throw ins (please don’t retire, guys) at the position to help my 2017 run.

Adding Flacco to a quarterback depth chart that already featured Carson Palmer (previously rostered), Rivers and Manning gave me a monopoly on boring, good enough quarterbacks with job security. A fourth quarterback is a bit of a luxury, but without a QB1 I’ll need volume to ensure I get the consistent 20+ points from the quarterback and superflex spots.

I like Brett Hundley, a YOLO quarterback who has flashed skills in preseason that make Dak’s memorable fake game action look like child’s play. He’s a free agent in 2019, but that’s a long time to wait on a speculative QB play when the opportunity cost is a best ball hero like Mike Wallace. Wallace probably won’t match his 2016 production, but he can be a top 40-50 wide receiver and help me win the league in ’17.

I still need at least four more running backs, but with my draft pick capital in a loaded class, I like my chances of going worst to first. Follow along as I continue to wrap up my one year rebuild here, if you please.